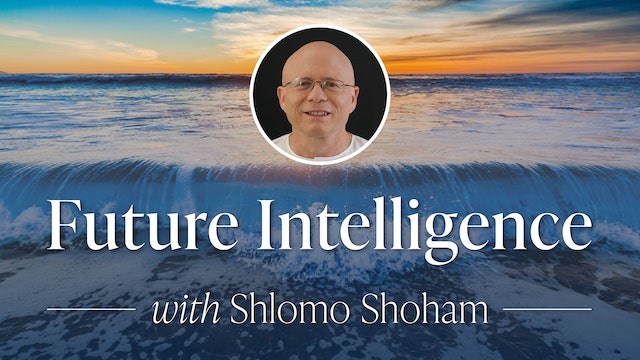 In viewing these lessons, while linking into his future imagery, the viewer will undergo a journey that will connect him to his/her calling by reaching the following understandings:
- how to create his best possible future
- how to bring it to fruition
- how to build his/her inner leadership
- how to take part in the interconnectedness process
He will then be open to experience, feel and understand the connection he has to the entire universe as well as the significance of this interconnectedness and the joy that this quantum leap brings into his life.

Judge (ret.) Shlomo Shoham served as the first Commissioner for Future Generations and as a legal advisor to the Constitution Law and Justice Committee, in the Israeli Parliament.

Shoham served as a Judge in the courts of Israel, headed a Military Court and served as a Chair of a Parole Committee in the last 6 years.

Shoham was a lecturer in the Law Faculties of the Universities of Tel Aviv, Jerusalem and Bar Ilan on range of subjects on Human Rights and Criminal Law.
He also taught Emotional Intelligence at the executive MPA program at the Hebrew University in Jerusalem.

Shoham serves as a meditation teacher in the last 25 years, his unique path in meditation is called NIGUN which symbolizes body soul and spirit, and combines eastern meditations, western psychotherapy and Hasidism (branch of the Jewish tradition), He was teaching and leading experiential workshops for thousands of people worldwide.

Shoham learned coaching psychology, and he is a well experienced mentor, specialized in training managers and CEO's to be mentors and leaders in their own organizations.

In recent years, Shoham was an honorary fellow at the Bertelsmann Foundation, where he wrote his book "Future Intelligence".

He is the founder of the Sustainable Global Leadership Association which trains promising young leaders together with CEO's political figures heads of NGO's etc… with the greatest potential to create global transformation.

The academy train future leaders to internalize a holistic approach and embody leadership at the intellectual, physical, emotional and awareness levels, focus on resonant leadership which goes beyond the hierarchy of the leader and the follower…

Judge Shoham is the Vice Chair of NIFG – International Network of Organizations for Future Generations and was appointed as a member of WIF – World Intellectual Forum, where his theme is – Future Intelligence – a path to Global Peace.